Fibromyalgia (FM) is a relatively common chronic rheumatic pain condition, characterised by widespread pain, fatigue and sleep disturbance. It occurs in around 3% of the population and is more frequently diagnosed in women than in men. While FM is often thought of as a recent discovery, it has in fact been described for centuries. However, over time the name, definition and theories about causation of the condition have changed considerably.

As far back as 1592, doctors were aware of conditions in which musculoskeletal pain did not originate from injury. The term ‘rheumatism’ was coined to describe these illnesses, which would have included FM, arthritis and many other conditions. The name was later changed to ‘muscular rheumatism’ to distinguish painful conditions which did not lead to the development of deformities.

In 1815, a Scottish surgeon, William Balfour, first described the tender points that until recently formed part of the diagnostic criteria for FM and by the end of the century, it had been acknowledged that stress might be a causal factor for the disease. In 1904, the British neurologist Sir William Gowers suggested the term ‘fibrositis’ (from ‘fibro’ meaning connective tissue and ‘itis’ meaning inflammation) to describe the condition. This reflected the current thinking that the underlying mechanism was an inflammatory response. However, much of the research apparently confirming this theory was later disproved. Elsewhere, it was shown for the first time that muscle pain could actually be the result of referred pain, implying that the central nervous system might be involved.

It was not until 1968 that a description matching the modern-day concept of FM was first published, by Eugene F. Traut. Key elements of the condition included generalised aching and stiffness, fatigue, poor sleep, headaches, colitis and tender points on physical examination. Various psychological elements, such as anxiety and a mind-body connection, were also noted. A common feature of the disease was pain in the axial skeleton and all four quadrants of the body. This criterion is still important in diagnosis today. In 1976, the name of the condition finally became fibromyalgia, from ‘fibro’ meaning connective tissue, ‘my’ meaning muscle and ‘algia’ meaning pain.

By the early 1980s it had been confirmed that pain, fatigue and sleep disturbance were all significantly more frequent in FM patients than in the general population. Sufferers also displayed numerous other symptoms, including several overlapping pain-related conditions such as irritable bowel syndrome and migraines. These criteria were now sufficient to differentiate patients with FM from non-sufferers. While the presence of the overlapping conditions was initially explained by muscle spasms, the cause was later thought to be central sensitisation.

In 1990, the American College of Rheumatology finally presented official diagnostic criteria for FM. These consisted of the presence of widespread pain for three months or more combined with tenderness in at least 11 of 18 specific tender points. No other symptoms were included, as they did not appear to improve the accuracy of the diagnosis. The criteria were updated in 2010, when the reliance on the presence of tender points was removed. Instead, patients are identified on the basis of questionnaire answers. To receive a diagnosis of FM, a patient must show a widespread pain index (WPI) score of 7 or above and a symptom severity (SS) scale score of 5 or above; or a WPI of 3-6 and SS of 9 or higher. In addition, the symptoms must have been present at a similar level for at least three months, and there must be no other explanation for the pain.

One remaining issue in the diagnosis of FM is the overlap of symptoms with other functional somatic problems which are otherwise medically unexplained, such as myalgias, fatigue and sleep disorders. Many of the symptoms of FM are also associated with depression and anxiety. This can lead some doctors to take the view that the condition is really the result of a somatisation disorder, in which psychological distress is manifested as physical symptoms.

While the diagnosis of FM has been clarified, the cause remains elusive. One view is that the condition may be triggered by a precipitating physically traumatic event, such as a road traffic accident, but this is not a universally-held opinion. There is clear data suggesting that FM is related to cervical spine injury, and it is also possible that the emotional trauma which often accompanies a physically traumatic event may interact and lead to FM. A recent meta-analysis, based on 51 studies, reported that despite the overall quality of the studies being low, the majority described a significant association between physical trauma and the onset of chronic widespread pain or FM. However, study quality is one of the main arguments against this theory, as most of the evidence comes from case series and studies that inherently rely on patients’ recall and attribution of events. Only five original research studies have provided evidence for the FM-trauma association. The results of these do not demonstrate a relationship with trauma overall and the evidence specifically for road traffic accidents is weak. It is also possible that using the current diagnostic criteria, FM may be over-diagnosed in road traffic accident casualties with whiplash due to the persistent localised tenderness experienced in the latter condition.

Although the existence of fibromyalgia is still not wholly accepted by the medical profession, research continues to confirm that it is indeed a very real disease, even if the exact causation is not yet fully understood. 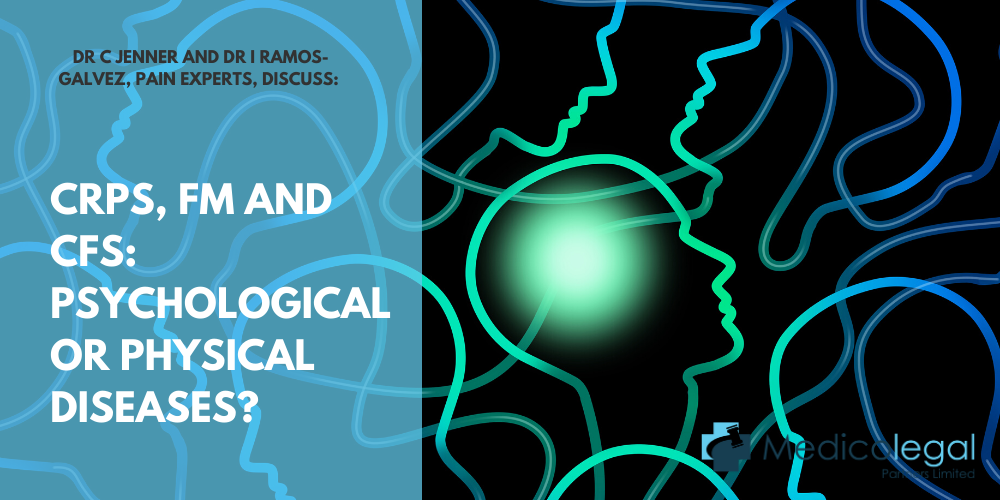 Complex regional pain syndrome (CRPS) and fibromyalgia (FM) are common chronic pain syndromes. Both are characterised by extreme pain but while CRPS affects only one...
READ MORE

The Medicolegal Challenges of Fibromyalgia

Although fibromyalgia (FM) is now widely accepted, there is still no definitive diagnostic test for the condition and the causes are not yet fully understood....
READ MORE
© 2023 Medicolegal Partners Limited