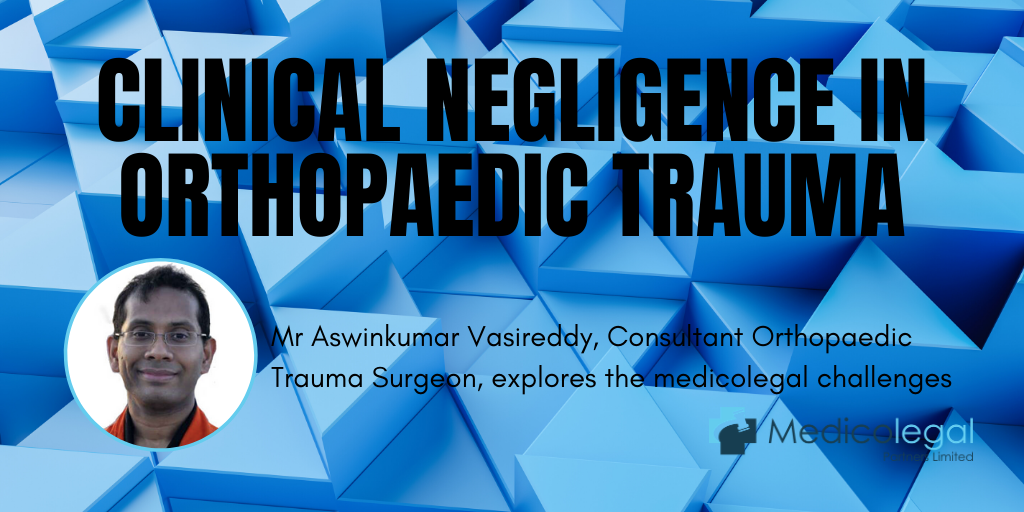 For a clinical negligence claim to be successful, it must be shown that the claimant was owed a duty of care by the defendant, that the duty of care was breached and that as a result of the breach, the claimant sustained harm (1). In 1999, changes were made to the Civil Procedure Rules which made the process of litigation less adversarial and resulted in a higher number of cases being settled out of court. The establishment of the NHS Litigation Authority in 1995 also shifted a large part of the legal responsibility for patient care onto the relevant Trust, rather than the individual doctor. However, doctors, particularly those in private practice, are still subject to claims for medical negligence (2).

In the last 20 years, the number of surgical procedures performed in trauma and orthopaedics has increased significantly (1). Claims relating to trauma and orthopaedic procedures are also growing in comparison with other areas in the NHS and this specialty now has one of highest rates of litigation in surgery (1,3,4), with only obstetrics and neurosurgery reporting higher rates (3). This is despite the fact that orthopaedic specialists make up less than 30% of surgeons in the UK (2). On average, a claim is made against an orthopaedic surgeon once every eight years, compared to every 35 years for an anaesthetist (3). Moreover, the overall risk of a claim for negligence being filed against an orthopaedic surgeon is related to the number of years spent in practice, and after 30 years the cumulative rate of being sued at least once is over 90% (4).

The high number of claims may be due partly to the consequences for the patient if mistakes or complications occur, but it has also been argued that it is a reflection of the number of procedures undertaken in this specialty. However, analysis of the Hospital Episode Statistics shows that between 2010/2011 and 2011/2012 the 1.6% rise in trauma and orthopaedic procedures was far outstripped by the 16% rise in claims in this speciality. Furthermore, the level of payouts is also rising. In the three years to 2014, the cost of orthopaedic claims rose by 60%, compared to just 12% across all NHS litigation claims during the same period (3). By the end of 2014, the total amount of compensation paid out was £349 million (1).

The commonest reasons for claims to be made include poor surgical outcomes and issues with judgement or the interpretation of the clinical picture which lead to a delay in diagnosis or treatment (2,3). A large proportion of cases relate to the management of fractures, with around 80% of the errors occurring in Accident and Emergency departments involving missed fractures. While the majority of these happen because radiographs are either misinterpreted or just not requested in the first place (2), in some instances fractures are missed because the injury is very subtle or does not show up on a radiograph. Missed fractures have serious implications for both patients and clinicians (5), so these findings highlight the importance of a thorough clinical examination and appropriate radiography, as well as proficiency in interpreting the results (2).

The patient’s definition and perception of a good or poor outcome may differ from that of their surgeon and it is this perception of an inadequate outcome which may result in a claim being raised. Poor surgical outcomes are common in fracture management (6) and are relatively easy to assess due to the availability of post-operative radiographs (2). Non-union of the fracture is an accepted complication following surgery but this does not mean that non-union should not be viewed as resulting from a poor standard of care. Malalignment after surgery can also lead to high compensation awards (6).

Claims for infection and issues such as compartment syndrome following orthopaedic surgery are comparatively uncommon (1), but the consequences for the patient can be devastating. Nearly 70% of cases of acute compartment syndrome (ACS), which occurs when excessive pressure builds up in a muscle space in the body, following a fracture (7). The consequence of a missed diagnosis of the condition is likely to result in some degree of disability or even the loss of the limb (7,8). Unfortunately, the early symptoms of the condition are non-specific and can easily be missed. As the diagnosis of ACS is usually made by assessing the evolution of signs and symptoms over time rather than at a single time point, it is important that serial examinations are performed, ideally by the same clinician (8). However, changes in the structure of medical care, which have increased the frequency of ‘patient handoffs’ have also increased the potential for cases of ACS to be either missed completely or mismanaged (9). While clinical negligence claims involving cases of compartment syndrome are relatively rare, they are around twice as likely to be settled in favour of the patient than other conditions (8).

Severely damaged limbs present some unique challenges which may leave a clinician open to the possibility of a claim for negligence. The question of whether to salvage a limb or amputate it can be a particularly difficult one to answer (10). Clearly, losing a limb is devastating for the patient, especially from a psychological viewpoint, but the physical outcome, in terms of function, is similar between salvage and amputation. However, if the decision to salvage a limb turns out to be wrong, it can lead to secondary amputation, which has huge implications for the patient (11). On the other hand, once a limb has been amputated it is impossible to argue that it could have been salvaged and this makes it very difficult to prove that this course of treatment was negligent. This may be one reason why the number of claims arising from amputations is very small (10).

The number of claims relating to issues of consent is also relatively low, at around 5% (1,3) but it is possible that this number will rise in the future, following a ruling by the House of Lords in 2004 (2,3). In the event that a patient experiences a complication about which they were not adequately pre-warned, a clinician can no longer claim that the patient would have agreed to an operation if they had been warned and that the failure to obtain adequate consent did not affect the patient’s decision. This potential rise in claims is concerning, as the mean payout for this category is comparatively high (1). An analysis of previous cases shows that inadequate consent was generally considered to be less important where knowledge about a potential complication was thought unlikely to affect a patient’s decision to give consent, particularly when the injury or symptoms were so severe that there was little alternative to surgery (2). However, obtaining consent prior to operation during a discussion in which all of the risks are outlined would help to reduce not only those claims linked directly to consent but would also serve to decrease patients’ dissatisfaction with the outcome of surgery, which, as already discussed, is a major reason for litigation (3).

Other measures that would help to prevent potential negligence claims include an increase in the number of procedures covered by surgical training and improvements in the education provided to surgeons once they have completed training. A more structured approach to patient management should help to reduce the number of claims attributable to judgement and interpretation of the clinical picture. Surgeons who are considering high-risk procedures which they do not perform regularly should instead contemplate referring the patient to a specialist centre which has the expertise to ensure both patient safety and satisfaction. By allowing clinicians sufficient time to properly analyse and discuss the patient’s problems and proposed treatment, patient expectations could be managed more successfully, thereby reducing the volume of claims that are based on the perception of negligence. Preventing claims from arising in the first place is the best way to reduce legal costs and to increase patient satisfaction (3).

Mr Vasireddy is a full-time fellowship-trained Orthopaedic Trauma Surgeon at King’s College Hospital. He specialises in the management of complex open/closed pelvic, acetabular, upper limb and lower limb fractures and amputations. He is also one of a small group of surgeons, and the only contemporary Orthopaedic Surgeon, in the UK who works as a HEMS (Air Ambulance) Pre-hospital Care Doctor.

He is available for instruction via Medicolegal Partners. Please get in touch to discuss a case with him.