Dealing with scarring as part of plastic surgery medicolegal claims 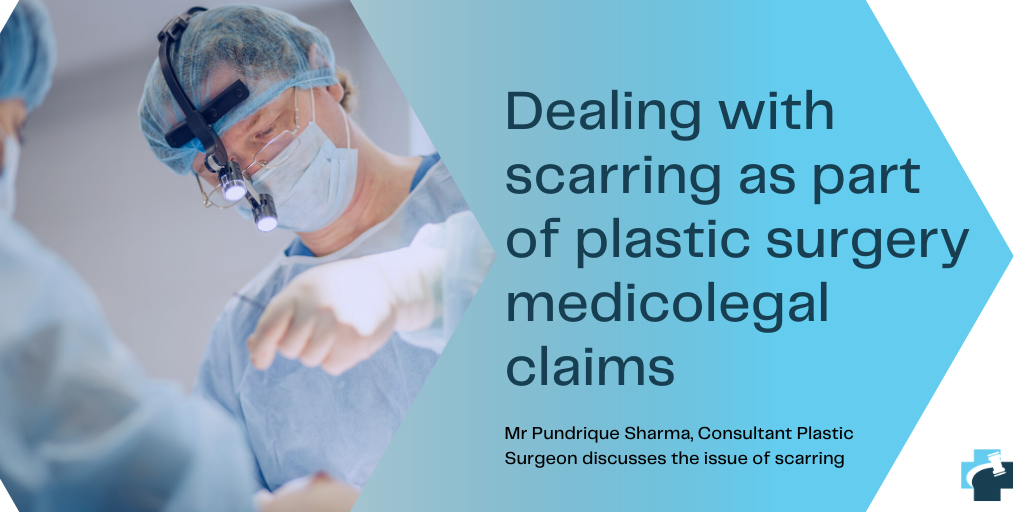 Scarring is an entirely normal physiological process evolved over billions of years to heal wounds, and an inevitable consequence of injuries whether they be deliberate and necessary (following an operation) or unintended (following an accident).

But, what actually is a scar? A scar is a healed wound that has healed in a way that is non-identical to the neighbouring tissue – that is to say it is identifiably different to the tissue it’s replacing and next to it, and it is that difference that makes it apparent. A scar can technically refer to any tissue that has healed “imperfectly” from heart muscle to tendons (and even on a metaphorical level to psychological wounds).  In general though, when we talk about scars (particularly in plastic surgery) we mean skin scars.

This definition of a scar then itself raises two questions: why is the healed skin different to the neighbouring tissue and what is the practical result of those differences? To understand these it is important to understand the actual components of the skin.

The skin is composed of two layers – the epidermis on the outside and the underlying dermis on which it sits. The epidermis is very thin and is primarily made of cells (epithelial cells) that multiply very rapidly. It forms a waterproof barrier with the outside world, protects from infection and also from ultraviolet light (largely thanks to the melanin in it that comes from special cells called melanocytes and give the colour to the skin). It is extremely thin and relatively flimsy, so much so that if one were to lift it off the dermis it would be almost see-through. The dermis is much thicker and tougher (animal dermis is the main component of leather) and is mainly composed of a strong fibrous protein called collagen and an elastic one called elastin. It also contains hair follicles and nerve cells (so you can feel), sweat glands, a large blood supply (allowing body temperature to be regulated), and sebaceous glands (keeping the skin moist). When an injury occurs the epidermis basically heals perfectly, but the dermis heals imperfectly – a different weaker collagen and less elastin so is more prone to stretching, changes in the nerve cells (so could be less or more sensitive), initially more blood vessels (so redder) and later less (so paler), and no hair follicles, sweat glands or sebaceous glands. It is these differences within the dermis that are primarily responsible for the “scar”. Collagen forms the basis of scar tissue. At first, this is laid down in a disorganised way within a highly vascular environment. Over time, most of the collagen is reabsorbed and the remainder is remodelled. At the same time, the vascularity of the site reduces. Thus, all scars start the healing process with a red and raised appearance, but over the course of about 6-12 months, this changes to leave a pale, flat scar.

Every wound will heal with a scar, but it is the surgeon’s aim to leave the patient with a mark that is as fine as possible. A surgeon can do this in several ways – for example by planning to place the scar in a less visible place, aligning it so there is less tension across it, using careful tissue handling, using the appropriate stitches, being mindful to reduce the risk of infection and giving advice as needed.

However, in some cases the scar becomes a problem and depending on its location, this can have psychological effects on the patient. Furthermore, there can also be functional problems with a scar such as a contracture of a scar that crosses a joint or a natural crease can restrict the range of normal movement or distort appearance. In extreme cases, where the parts of the joint are drawn into abnormal positions, it can even lead to musculoskeletal issues such as dislocation or growth restriction. Complications regarding scarring are extremely common in medicolegal cases involving plastic surgery and it has been estimated that nearly three-quarters of all cases require an expert opinion on this issue.

There a basically 4 groups of “poor scarring” that we think of:

Atrophic scars where the scar is very thin (sometimes so thin that it actually ends up breaking down into a wound or “ulcerates” with slight trauma) and prone to stretching.

Stretch marks (striae distensae) where the skin has been rapidly stretched and thinned almost like a rubber band that has been stretched beyond its elastic limit.

Hypertrophic scars these may occur following healing under significant tension or some post-injury/post-operative issue such as delayed wound healing or infection. The scar is raised and often red and itchy. While they may settle they do not always do so.

Keloid scars these scars share some similarities with hypertrophic scars but are usually much more lumpy, spread beyond the boundaries of the original scar and can in fact keep on growing unchecked (in theory they can be classified as “tumours” though they are not cancers – they do not pose a danger to life or limb and do not spread). They are much more common in darker skinned peoples.

The final appearance of a scar is dependent on many factors. The surgical factors have already been mentioned, but some other factors, such as age, ethnicity and hereditary disposition, are related to the patient and cannot be controlled by the surgeon. Even so, a history of keloid or hypertrophic scar formation should be a signal that the patient will require close follow-up and possible early intervention, should any complications occur.

The best time to influence the eventual appearance of a scar is at the time of initial wound repair. This is partly because once a scar has matured, the options for improving its appearance are limited. This is particularly true for hypertrophic and keloid scars, where excision may actually result in an even larger and more unattractive scar. The application of steroids, either through intralesional injection or applied as a topical cream, can improve itching and hyperpigmentation. Topical pressure, through the use of elasticated garments, speeds the maturation of collagen and flattens the scar, but while this treatment generally has few complications, there have been reports that in children use of the garments on the thorax may interfere with the growth of the spine and result in scoliosis. Recent advances in laser technology may also offer new treatments for scar correction. However, for many scars, the best treatment is simply to wait: facial scars in particular often improve so much spontaneously that after 12 months there is no need for surgical revision.

The assessment of scarring for medico-legal purposes can be difficult. And can be broken down into three aspects: the descriptive appearance of the scar, the functional result of the scar and the psychological effect of the scar.

The appearance and nature of the scar can described relatively objectively in various ways, such as using the Vancouver Scar Scale, as can the functional effects of a scar. However, assessing the psychological impact is much more challenging and sometimes counterintuitive – a study at the University  of Liverpool in 2008 showed that some facial scars can make men more attractive rather than less to the opposite sex.

Aesthetic damage often does not entail an economic loss to the patient but disfigurement can be psychologically traumatic. Compensation in these cases is based purely on the subjective opinion of a medical expert and thus is not an exact science. Although there are various tools available to assess the visual characteristics of scars, they cannot measure subjective factors such as pain and itching, and these factors often have the greatest impact on a patient’s quality of life.

While the public perception tends to be that plastic surgeons can produce invisible scars, this is not actually the case. Every wound will heal with a scar; the aim is to make it as small as possible. While many factors that influence scar healing and formation are outside the control of the surgeon, good planning and technique will help to minimise the chances of an adverse outcome. Furthermore, open communication with the patient should lead to realistic expectations of what can be achieved and what complications might occur.

Mr Pundrique Sharma, Consultant Plastic Surgeon, is available for instruction via Medicolegal Partners.  He is able to offer expert opinion on adult and paediatric cases, as well as cosmetic surgery.  Click here for full details on his biography, CV and to watch his introductory video.