When and How Errors Occur in Neuroradiology 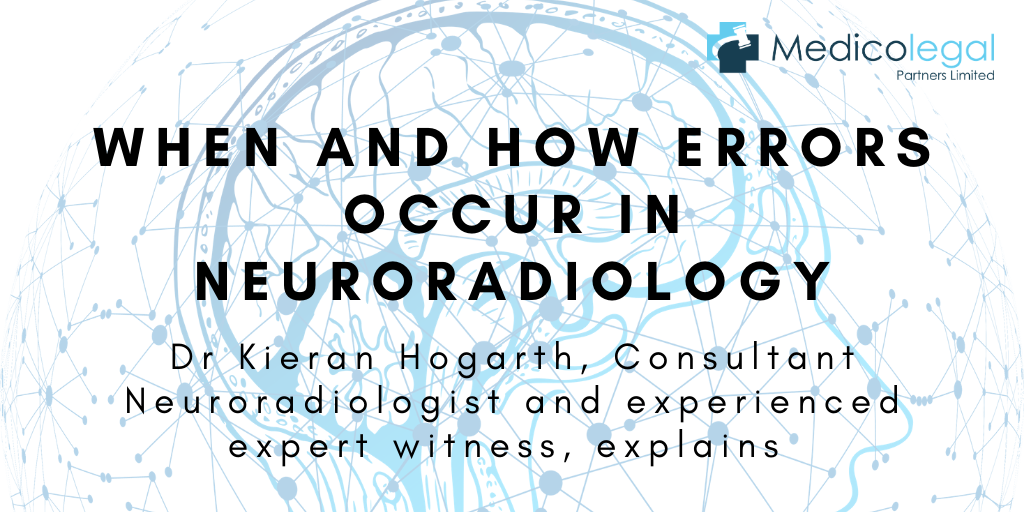 Neuroradiology is a subspecialty of radiology that uses imaging techniques, such as x-rays and computed tomography scans, to diagnose conditions affecting the nervous system, spine, head and neck. As far back as the 1950s, there was an awareness of a relatively high real-time day-to-day error rate in radiology as a whole, at around 3-5%. The error rate in retrospectively-viewed cases is much higher, at around 30%. Interestingly, rates have hardly changed in the intervening years, despite huge advances in techniques and knowledge. Subsequent studies have also shown that the error rates in the various subspecialties are remarkably consistent with those in radiology overall. In this article Dr Kieran Hogarth, Consultant Neuroradiologist and lead radiologist for neuroimaging at the Royal Berkshire Hospital, explores when and how errors occur in neuroradiology.

In neuroradiology, the frontal area of the head, including the frontal lobe, ethmoid sinuses, frontal bone and soft tissues, appears to be the site of more errors than any other region. This is explained by the high number of potential findings that may be present in a relatively small area. It is possible that many different pathologies will coexist and it can be difficult even for an experienced practitioner to detect all of them. While the majority of errors are minor in nature, some can lead to delayed or even incorrect diagnoses and thus have serious consequences for patients.

Radiological errors are categorised as being either perceptual or interpretive (sometimes also known as cognitive). Perceptual errors, where a finding is not recognised, lead to incorrect, delayed or missed diagnoses. They are the most common type of error, and their frequency increases with imaging reading rate and duration of shift. Around three-quarters of legal claims in radiology arise from perceptual errors. In interpretive errors, clinical signs are recognised but either incorrectly interpreted or understood.

Both types of errors are subject to various biases, which include failing to adjust an initial impression despite receiving additional information, or accepting a preliminary diagnosis as final; actively searching for data to confirm an existing hypothesis rather than testing a competing hypothesis, or perpetuating the findings from a previous report; missing findings due to their unexpected location or nature, and failing to search for additional findings once the first abnormality has been identified.

In addition, interpretation of imaging results may be influenced by the way in which the information is presented to the clinician. The number of imaging procedures performed has risen in recent years and there is an increasing pressure on radiology departments to improve both speed and output. Imaging may be requested before the patient has been fully examined or a detailed history has been taken. Therefore, relevant information is often not fully communicated and this can lead to bias in the interpretation of the images.

This increase in workload also gives rise to an elevated risk of mental and visual fatigue, which may then lead to errors being made. At the end of a shift, radiologists often show a decrease in detection rate, due to a reduced ability to focus, and increased symptoms of fatigue and oculomotor strain. Continuous decision–making over a prolonged period can also lead to decision fatigue. This results in unconsciously taking shortcuts in cognitive processes, with an ensuing risk of poor judgement and diagnostic errors.

One potential source of error that is often overlooked is the production of poorly written or incoherent reports. As written reports are the principal means of communication between the radiologist and the referrer, they are often the only way in which the radiologist can convey his or her interpretation, diagnosis and advice. However, poor structure or organisation, poor choice of vocabulary and errors in grammar or punctuation may lead to difficulties in understanding the intended meaning. Moreover, the now-commonplace use of voice recognition software, and a subsequent failure to check for errors introduced into a report by suboptimal systems, has led to a significant increase in error rates in reports when compared to those prepared by dictation or manual transcription.

It is important to realise that radiologic images alone rarely lead to a definitive diagnosis. Instead, interpretation is influenced by many factors, including the specific imaging protocol used, the clinical circumstances of the patient, their relevant medical history and the availability of previous imaging. Many cases of supposed ‘error’ are in fact just differences in the interpretation or opinion provided by different practitioners and would be better described as ‘discrepancies’. Even among experienced radiologists, there can be considerable inter- and intrareader variation in interpretation, which can be as high as 30%.

Another reason for the relatively high number of errors in radiology is that previous images are almost always available for review, particularly since the advent of digital archiving systems, and this allows clinical decisions to be re-interpreted or reviewed at a later date. This capacity is far less widely available in other medical specialties but the limited data available suggest that, in fact, the error rates seen in radiology are comparable to other fields. Furthermore, it is easier to spot an abnormality when the outcome of a case is already known, such as when an expert witness is reviewing the evidence in a legal case. However, knowledge of the outcome may unduly influence the expert’s opinion of whether the abnormality should have been spotted in the first place, and thus whether the failure to detect it constitutes negligence.

The interpretation of radiologic images is not an exact science and it is impossible to eliminate all errors. However, by having an awareness of reasoning processes and their potential biases, and other issues that can lead to mistakes, it is likely that some errors could be avoided.

Dr Hogarth is a consultant at the Royal Berkshire Hospital, where he is the lead radiologist for neuroimaging. His practice includes adult and paediatric neuroradiology. He has been writing reports for the Family Court since 2012, has extensive experience writing medicolegal reports and has attended court on multiple occasions. He has previously worked as a Consultant Neuroradiologist at the John Radcliffe Hospital (Oxford University Hospitals NHS Trust) where he led the paediatric neuroradiology and paediatric neuro-oncology Multi-Disciplinary Teams (MDTs). He completed the London Deanery neuroradiology fellowship training programme at The National Hospital for Neurology & Neurosurgery, Great Ormond Street Hospital for Children and King’s College Hospital. Read his full biography and download his CV here.