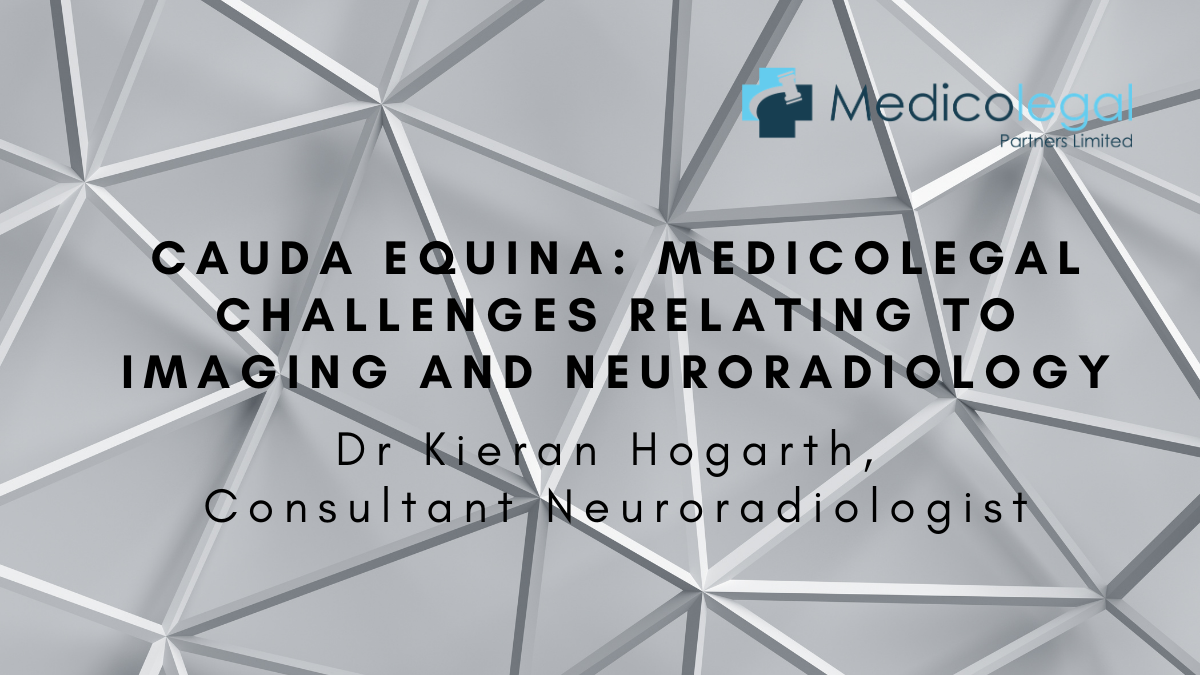 Cauda equina syndrome (CES) is a rare condition, diagnosed in <1% of patients presenting to an emergency department with back pain, in which the nerves at the base of the spine become compressed, potentially leading to permanent loss of function. Dr Kieran Hogarth, Consultant Neuroradiologist, lead radiologist for neuroimaging at The Royal Berkshire Hospital and experienced expert witness, explores the medicolegal challenges relating to imaging and neuroradiology in cases involving CES.

The condition is often caused by a prolapsed disc in the spine and may require emergency surgery. Other causes include tumours, infections, stenosis of the spine (particularly in the elderly), haematoma, inflammation and vascular changes. The clinical presentation is variable and is characterised by a broad range of symptoms and signs, some of which, such as low back pain and sciatica, are relatively common and not specific to CES.

Thus, diagnosis can be challenging, and the condition is normally confirmed by magnetic resonance imaging (MRI) scans. MRI is preferred over other types of scans as it has superior soft-tissue contrast resolution, which makes visualising nerve roots within the thecal sac, the membranous sheath that surrounds the spinal cord and cauda equina, possible. Such detailed anatomy is not readily visible through other forms of scanning. One major drawback of MRI is that it is not always available in an emergency situation that arises out-of-hours, particularly in smaller regional hospitals. It is also an expensive procedure. Furthermore, classification of the findings from MRI is difficult, as many different terminologies and phrases may be used to describe identical pathology.

Studies have indicated that only around 50% of MRI scans of patients with suspected CES demonstrate pathology indicating impingement or disc prolapse, a situation which may require emergency discectomy. Patients without impingement still require urgent management, but they do not need to be treated as an emergency. Thus, both MRI and surgery could be deferred in these patients until the next available list. The challenge lies in identifying which patients are emergencies and which are not. Given the serious consequences of a missed or delayed diagnosis, most clinicians opt for MRI as a matter of course, but this comes at a cost, both in terms of healthcare expenditure and in subjecting the patient to potentially unnecessary procedures.

One major issue is that the patient’s history and findings on clinical examination are rarely enough to definitely diagnose CES. Studies of the correlation between clinical assessments and the results of MRI scanning indicate that symptoms such as urinary retention, urinary frequency, incontinence, altered urinary sensation and altered perineal sensation are only accurate in diagnosing CES in around 60% of cases. Therefore, the evidence that individual signs and symptoms are sufficient to diagnose CES is limited.

However, it has been reported that a combination of findings from physical examination do provide an effective means of excluding a diagnosis of CES. Sensitivity and specificity were 100% for bulbocavernosus reflex (BCR), and, while lower for rectal tone, postvoid residual bladder and perianal sensation, they were still well above 50%. In addition, BCR had a positive predictive value of 100%, and the negative predictive value was 96–100% for all the symptoms considered. A decision tree incorporating rectal tone, perianal sensation and BCR resulted in no false negatives, indicating that this combination of symptoms may be an effective way of ruling out the presence of CES.

While it may be the case that a combination of symptoms provides a better basis for diagnosis, these results came from a relatively small study and have yet to be established in larger groups of patients. Thus, MRI currently remains the gold standard method of diagnosis for CES. However, some patients have contraindications to MRI. These include the presence of a pacemaker or spinal cord stimulator, or metal fragments such as shrapnel in the body. In these situations, a computed tomography (CT) myelogram may be used instead. CT has advantages over MRI in that it is both cheaper and more readily available. However, its usefulness in detecting spinal problems that may contribute to CES has not been fully investigated.

A recent exploratory study compared the findings from MRI and CT in a series of patients with suspected CES. Although soft tissue resolution is lower than in MRI, CT is still adequate to reliably determine the percentage thecal sac effacement (PTSE), a marker hypothesised to infer the presence or absence of cauda equina nerve impingement at a cut-off of 50%. In this study, no cases of cauda equina impingement were missed on CT scans. Thus, the technique could potentially help clinicians to identify which cases should undergo MRI as an emergency. Conversely, in cases with CT-PTSE <50% and a low clinical suspicion of CES, MRI could be deferred. This may be particularly relevant in settings with limited access to MRI scanners, and it could also lower healthcare costs by decreasing the number of MRI examinations which show no convincing CES pathology and are therefore not subsequently followed by emergency surgery.

Current national guidelines in the UK state that all patients with suspected CES should undergo an MRI prior to referral to a specialist spinal unit, and surgery should be performed as soon as possible. It is evident that while not all cases require treatment as an emergency, most patients need to be treated urgently. Until more reliable methods exist for classifying patients, MRI remains the method of choice for diagnosing CES.

Dr Hogarth is a consultant at the Royal Berkshire Hospital, where he is the lead radiologist for neuroimaging. His practice includes adult and paediatric neuroradiology. He has been writing reports for the Family Court since 2012, has extensive experience writing medicolegal reports and has attended court on multiple occasions. He has previously worked as a Consultant Neuroradiologist at the John Radcliffe Hospital (Oxford University Hospitals NHS Trust) where he led the paediatric neuroradiology and paediatric neuro-oncology Multi-Disciplinary Teams (MDTs). He completed the London Deanery neuroradiology fellowship training programme at The National Hospital for Neurology & Neurosurgery, Great Ormond Street Hospital for Children and King’s College Hospital.