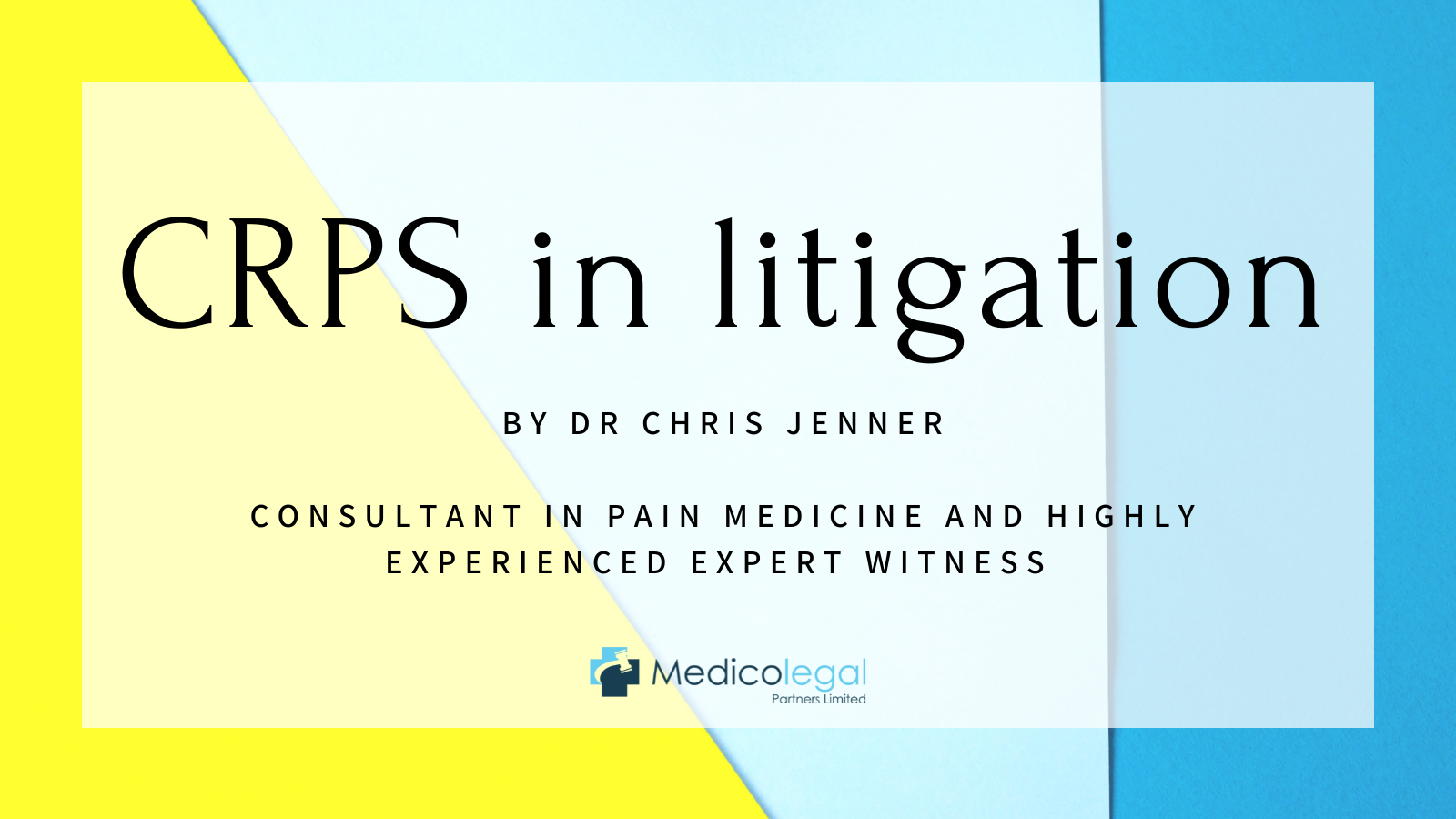 1.1 Complex Regional Pain Syndrome (CRPS) remains a poorly understood phenomenon. In the realm of medical litigation, the syndrome can prove particularly challenging to substantiate. This is often due to the lack of organic pathology and the presence of complex psychosocial interactions. In addition, there is a range of opinion among medical experts about the existence of this condition. This report aims to examine the difficulties in establishing and supporting a diagnosis of CRPS, while accepting that a range of opinion exists.

2.1 CRPS is a difficult condition to confirm, and diagnosis is based on the presence of specific signs and symptoms. A number of diagnostic criteria exist, including the International Association for the Study of Pain’s diagnostic criteria (1), the Budapest criteria (2) and the Veldman criteria (3). In addition, Atkins et al (4) proposed diagnostic criteria for CRPS to be used specifically in the specialty of orthopaedics. Of all these, the Budapest criteria are the most commonly used and accepted; however, no diagnostic test is considered to be definitive in establishing the syndrome. The particular issue with CRPS in the medicolegal process is that its diagnosis is one of exclusion: no other underlying pathology can be present at the time that the diagnosis is made. This includes positive findings from imaging and blood tests. The concept that a patient can suffer with a painful and often debilitating condition in the absence of any organic pathophysiology is a challenging point to prove. This is particularly true if the initiating injury appears to be relatively minor but results in a prolonged period of suffering. The situation is made even more problematic by the fact that the patient’s physical symptoms are often accompanied by a psychological or psychiatric history. Convincing the court that a soft tissue injury that occurred some years previously has manifested as CRPS in a patient with a background of complex mental health disorders is often a gruelling process.

3.1 Chronic pain and mental health issues are frequently strongly associated with each other, and CRPS is no exception to this. When defending against a claim for CRPS in the medicolegal process, the defence will almost always take the position that the claimant is suffering instead from a psychological/psychiatric disorder. A 2018 study (5) found that, out of 50 consecutive cases of CRPS undergoing psychiatric evaluation, 84% satisfied the criteria given in the 5th edition of the Diagnostic and Statistical Manual of Mental Disorders (DSM-5) for somatic symptom disorder (referred to in this study by its former name of somatoform disorder). Other common psychological diagnoses include adjustment disorder and mood disorders (5,6).

3.2 When a pain physician gives evidence as an expert witness in a case of CRPS, it is of paramount importance that the claimant’s psychiatric history is meticulously examined and acknowledged. A pre-existing psychiatric history can significantly affect an individual’s ability to deal with adversity, and concomitant psychiatric issues can contribute to the amplification and maintenance of chronic pain (6). Identifying these issues allows the pain physician to further scrutinise the claimant’s presentation and subsequently offer a holistic opinion on causation, treatment and prognosis.

4.1 Somatic symptom disorder (SSD), formerly known as somatoform disorder, is one of the most common differential diagnoses in relation to CRPS. SSD is characterised by psychological/psychiatric issues which can manifest with pain. It is defined in the DSM-5 as:

4.2 Claimants who fail to demonstrate any underlying organic pathology on investigative testing that would lead to a diagnosis of CRPS are very often considered for an evaluation of SSD. Obtaining this diagnosis from the relevant expert witness in psychology/psychiatry allows the defence to argue that the claimant does not suffer from a chronic pain condition but has instead a psychiatric disorder, which may or may not have been caused by the material injury.

4.3 It is commonplace for patients to present with signs and symptoms that fulfil the criteria for a diagnosis of CRPS, whilst also fulfilling the DSM-5 criteria for SSD (5).

5 The Range of Opinion

5.1 An expert witness’s duty is to the court. When giving evidence it is important to recognise and accept that a range of opinion exists. In cases of CRPS, this range usually lies within the domain of psychology/psychiatry as outlined above.

5.2 Accepting that an alternative diagnosis may be used to explain a claimant’s symptoms does not invalidate the diagnosis of CRPS. The onus is on the relevant instructed expert witness to prove that a claimant fulfils the diagnostic criteria necessary for the alternative diagnosis, and that the diagnosis is sufficient to explain all of the signs and symptoms attributed to CRPS. There is a delicate line between conceding one’s opinion and acknowledging another’s, and the key is to defer on matters outside one’s area of expertise.

6.1 The Royal College of Physicians lists the following conditions as differential diagnoses for CRPS, although they state that this list is not exhaustive:

6.2 It has been suggested that CRPS, fibromyalgia and regional pain syndrome are overlapping phenotypes of the same disease process, which have been modified by genetics, psychology and local physical factors (9).

7.1 CRPS remains a poorly understood and challenging condition. There is no definitive test for CRPS; instead, diagnosis is made on the basis of self-reported signs and symptoms using one of a number of diagnostic criteria. Of these, the Budapest criteria are the most widely used. A range of other physical conditions may be offered as a differential diagnosis for CRPS. Additionally, in many patients, the physical symptoms are combined with psychological symptoms or a history of psychiatric issues, and up to 80% of CRPS patients satisfy the DSM-5 criteria for somatic symptom disorder (formerly termed somatoform disorder). This condition is characterised by psychological or psychiatric issues that manifest as pain. Determining whether the patient’s condition is predominately physical or psychological in nature can be challenging. There is likely to be a range of opinion and accepting an alternative diagnosis does not necessarily invalidate a diagnosis of CRPS.

*Not required for diagnosis

8.2 Appendix 2: The Budapest Criteria for CRPS

8.3 Appendix 3: The Veldman Criteria for CRPS