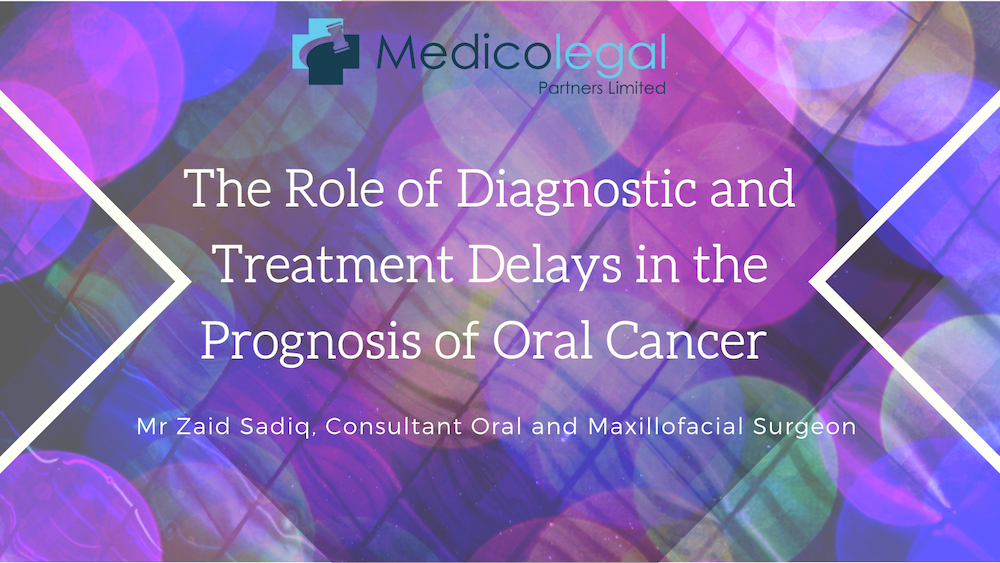 Cancer of the oral cavity is the most common malignancy of the head and neck (1). The disease occurs more frequently in men (2–4), although the current male-to-female ratio of 2:1 appears to be decreasing (2,3). While the disease is much more prevalent in patients who are middle-aged or older (2–4), there has been a recent increase in its occurrence in younger individuals (3). The prognosis for patients is linked to the disease stage at diagnosis (2–5) and has significantly improved over the last 40 years (1,4). This is equally true for both early- and late-stage tumours. In 1973, 3-year survival rates were 78.0% for early-stage disease and 51.9% for late-stage disease. By 2014, these figures had increased to 92.2% and 70.3% (1), probably due to the increasing usage of chemotherapy as an adjuvant therapy following surgery (1,4). However, there is some evidence that the survival rate is linked to ethnicity, with 5-year survival rates in men of African-American origin being much lower than those in white men (3).

However, there remains a risk of delay throughout the diagnostic process, from initial presentation by the patient to referral and biopsy (6). Despite the fact that the oral cavity is easy to examine without specialised instruments, around two-thirds of tumours are only detected at an advanced stage (2–5) and metastases are present in around 40% of cases at diagnosis (2,3). The impact of this delay remains controversial, with some reports that a delay in diagnosis of more than a month results in more advanced stages of the disease being identified (6). This finding is not universal though, as several studies have failed to find any association between delay, stage of disease and outcome (2,6).

Delays in the diagnosis of oral cancer are the commonest reason for litigation for alleged medical negligence (6,7) and can result in large settlements. This is due to the cost of care and the potential impact on the patient, which includes pain, disfigurement, reduced quality of life and psychological distress (2,6). However, a poor outcome is not always indicative of medical negligence, as it is dependent on many factors, including the characteristics of the patient and the individual biology of the tumour (6,7). For example, there is evidence of a link between the expression of MSH2, a DNA repair protein, and outcome in cancers of the head and neck. Patients with low MSH2 expression have poorer outcomes and a lower chance of survival (8).

A major reason for delay in identifying oral cancers is that they can be very difficult to diagnose. In the early stages, there are very few symptoms and even if these are present, they tend to be minor and non-specific and thus are often mistaken for other trivial conditions (2,3,6). Previously existing symptoms, particularly the sore throat, cough and hoarseness often associated with smoking or alcohol consumption, may further obscure the early symptoms of oral cancer (2). Even advanced tumours can be associated with limited symptoms. Lesions in the mouth can appear clinically innocuous, presenting as red or white patches that are apparently benign (6). As a result, patients and healthcare providers may not suspect cancer (2,6). This may lead to a considerable delay between the appearance of the first symptoms and the initiation of treatment. On average, it takes just over 5 weeks for referral to a specialist, and a further 5 weeks for surgical treatment, or 10 weeks for radiation therapy (6). However, the longest delay is often due to the patient’s failure to visit their doctor when symptoms first appear, with the average time period being around 5-9 months (2,6).

Perhaps surprisingly, dentists are at least as likely as doctors to identify the initial signs of oral cancer (2,6). Despite this, less than two-thirds of dentists routinely examine their patients for the disease, while doctors report that they generally only perform a mouth examination when the patient experiences symptoms. Confidence in being able to accurately detect oral cancer is low in both professions. A proper diagnosis can only be made following a thorough examination of the mouth, appropriate testing and accurate interpretation of the results (6). This may necessitate referral to a more qualified or experienced practitioner (2,6). It is important that the initial examination includes evaluation of the cranial nerves and cervical lymph nodes, as well as inspection of the soft tissues of the mouth (4,6). Even when an abnormality is detected and treatment initiated, proper monitoring of the effectiveness of the therapy is often lacking. Therefore, treatment may continue for some time, even when it is ineffective (2).

A major complication in diagnosis is the fact that not all pre-malignant conditions become cancerous (3,6). Even when they do, differences at the cellular level, both within and between tumours, mean that the rate of progression is not predictable. Furthermore, precise differentiation between the various stages of premalignancy and cancer can be subjective and requires considerable expertise. Generally, symptoms that fluctuate are less likely to indicate a malignant condition, whereas persistent symptoms that get progressively worse should always be investigated further. Once the disease has become more advanced, as well as the presence of a mass, it may be associated with symptoms such as discomfort, localised sensory alterations, limited movement of the affected tissues, speech difficulties, ulceration or bleeding, swelling in the neck and weight loss. However, even in the presence of symptoms, diagnosis of oral cancer can be difficult and failure to do so may not necessarily imply negligence on the part of the doctor or dentist (6).

The likelihood of making an accurate diagnosis is improved if the appropriate tests are conducted and their results correctly interpreted. Often this will depend on the resources available and the training and experience of the clinician. Many investigations begin with a biopsy of the suspicious lesion. However, site selection, technique and quality of the specimen may all affect the interpretation of the results (2,6). There is also evidence of inter- and intra-rater variability, which may influence the likelihood of a cancer diagnosis being made. This is also true of other tissue sampling techniques, such as exfoliative cytology, fine-needle aspiration and core biopsy (6). It also appears that often a biopsy is not performed at all: nearly half of all legal cases involving cancers of the head and neck allege that a biopsy was indicated but not carried out (2,6).

Some biopsy results can be extremely difficult to interpret, particularly where the histopathologic diagnosis is not consistent with the clinical appearance of the lesion. In these cases, it may be necessary to repeat the biopsy or refer on to a more specialised and experienced clinician (6). Imaging techniques such as computed tomography and magnetic resonance imaging can be extremely useful in determining the extent of the primary tumour as well as regional and distant metastatic disease (3,4) but these may not always be available and interpretation of the results is dependent on the skill and experience of the clinician (6).

The Covid-19 pandemic is likely to have a significant effect on oral cancer diagnosis rates. The British Dental Association estimates that in England alone, 14 million dental appointments were missed during lockdown. This means that thousands of patients have missed oral cancer examinations that would have taken place as part of a routine appointment, or have not undergone further investigation following referral. Across the NHS, waiting times for all types of cancer have increased, with 20,000 patients failing to be seen within 14 days of referral by their GP. For oral cancer, this means there is an increased likelihood that cases will not be detected until tumours are at a more advanced stage. It is also likely that the effects of the backlog of suspected cases on referral times, diagnosis and ultimately outcome will persist for several years (9).

The association of oral cancer with both the human papillomavirus and immunosuppression means that the epidemiology of the disease is changing (3,4,6), and it is now much more common in younger populations who were previously thought to be at very low risk (2,3,6,7). Doctors and dentists need to be aware of this change when examining younger patients, even when minimal signs and symptoms are present. In addition, the separation of medicine and dentistry may make it more difficult for patients to access the required oral care (6). Increased awareness of the importance of recognising the symptoms of oral cancer early is urgently needed, both in the medical and dental professions and among the general public (2–4). Delays in diagnosing oral cancer can have extremely serious consequences, both from the patients’ and legal perspectives (2,6).

Mr Zaid Sadiq is a Consultant Oral and Maxillofacial Surgeon at the Queen Victoria Hospital. Mr Sadiq is qualified in both medicine and dentistry and has a keen interest in cancer, reconstructive surgery and tissue engineering. His specialist areas for both claimant and defendant are: 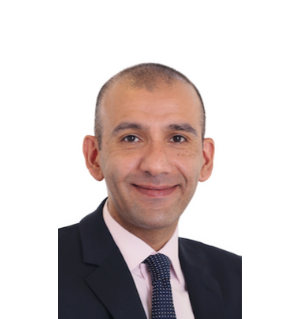 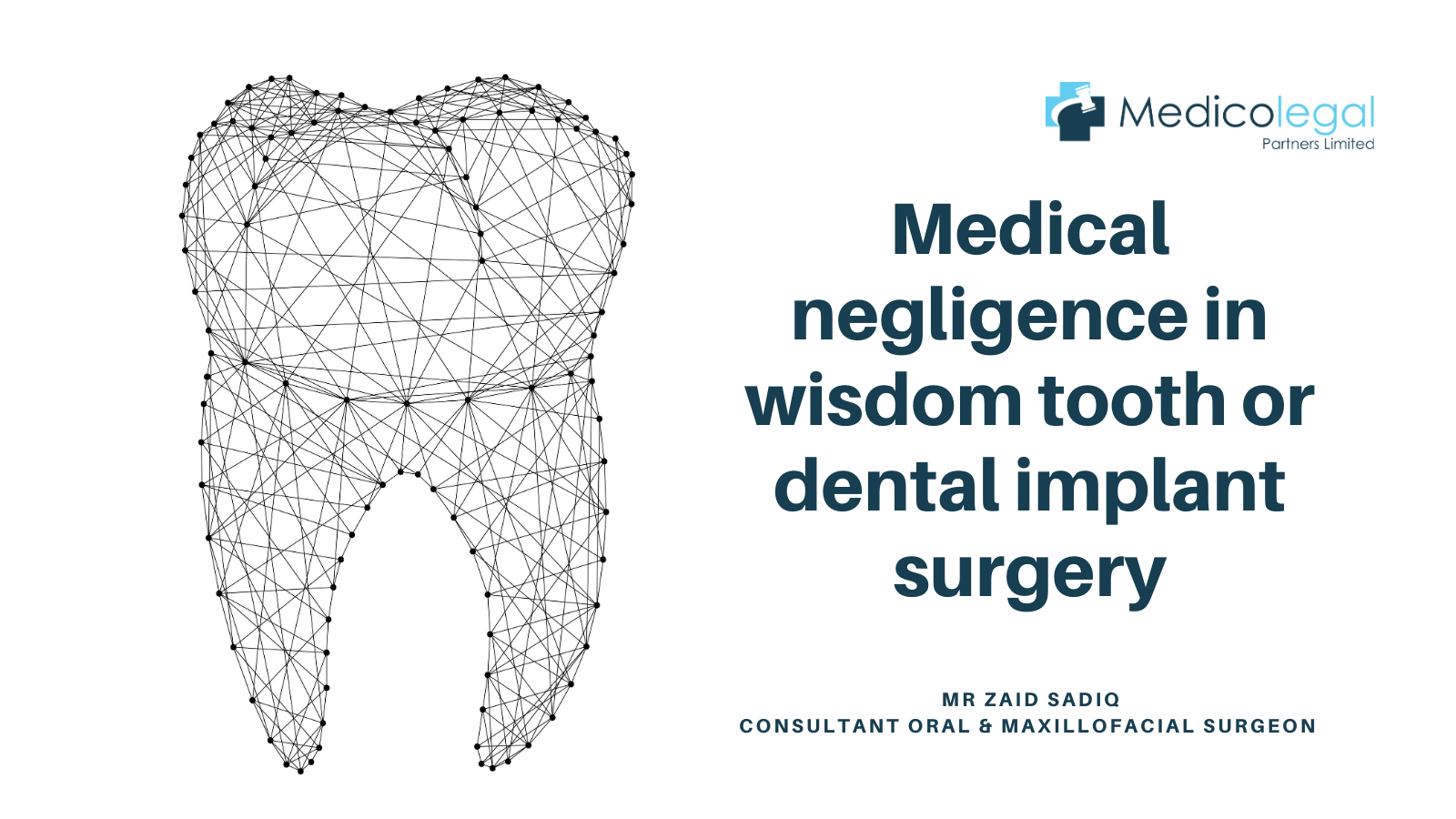 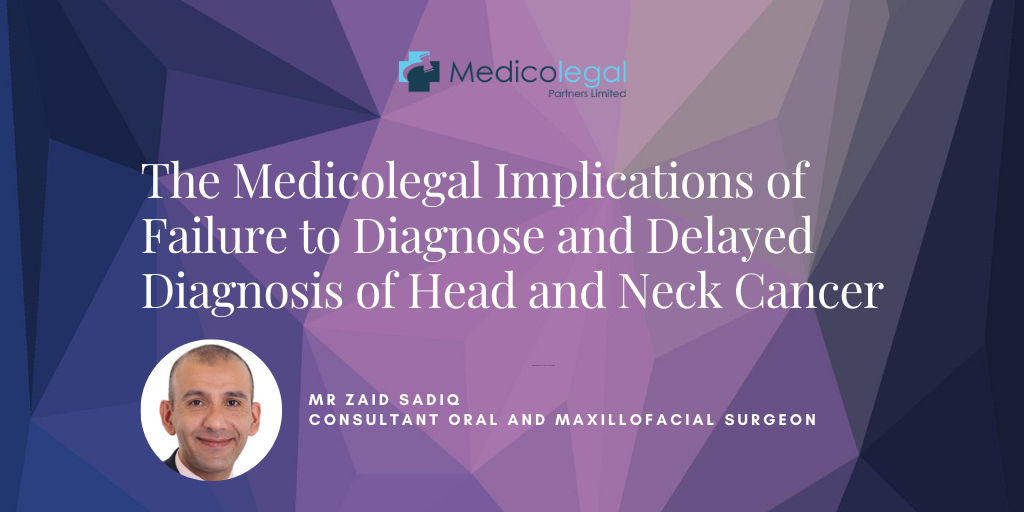 Head and neck cancers (HNC) are relatively uncommon, accounting for less than 5% of all cancers, and are generally associated with longstanding tobacco and alcohol...
READ MORE 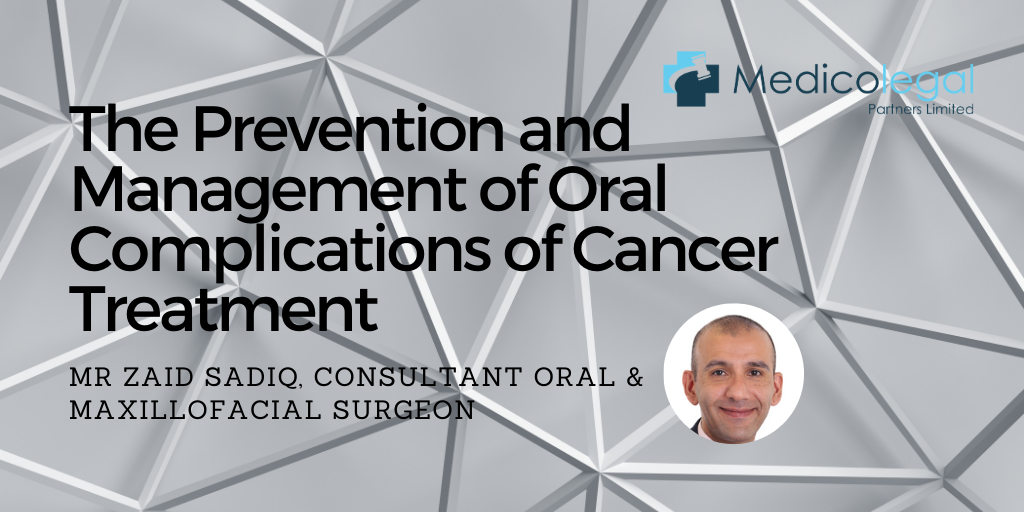 The Prevention and Management of Oral Complications of Cancer Treatment