The Medicolegal Challenges of Brachial Plexus Injuries at Birth 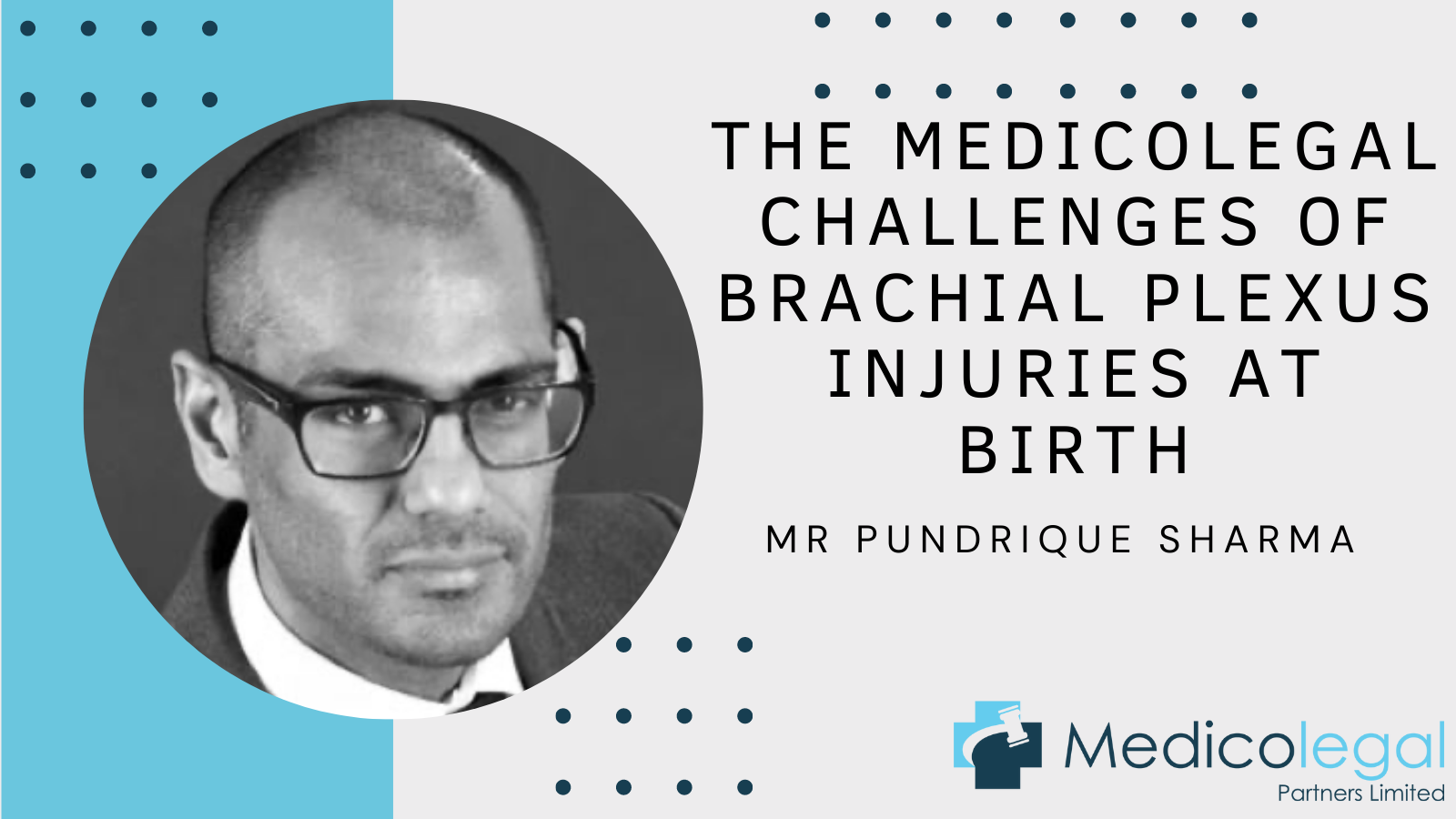 The brachial plexus is formed from the connections of the spinal nerves arising from the vertebrae C5 to T1. Once they leave the arise from the spinal roots, these major nerves branch into a complex network of nerves that supply feeling and movement to the arm. Obstetric Brachial plexus injury (OBPI) is defined as damage to any nerve that forms part of the brachial plexus, and the consequence of it can be anything from a minor loss of movement, to a completely paralysed arm. OBPI is relatively rare, with an incidence of between 0.38 and 4.6 per 1000 live births. This incidence has remained fairly consistent over the past few decades, chiefly because the main causes of the condition are unpredictable and hard to prevent.

The commonest type of injury seen in OBPI is stretching of the nerves during a slow or difficult delivery, which occurs due to traction on the head or upper limbs, depending on the baby’s position. Often, this is due to one of the baby’s shoulders becoming stuck behind the mother’s pubic bone, which often slows the birth. OBPI also occurs more often in babies who are larger than average, particularly those with a birthweight greater than 4500 g. Other risk factors include a delivery that requires intervention with instruments, a prolonged labour for any reason, prematurity if associated with a breech presentation, a history of OBPI in previous births, and maternal diabetes or excessive weight gain during pregnancy – essentially all things that predispose to a difficult delivery.

Assessment of OBPI is based on clinical examination. Typically, diagnosis is fairly easy as asymmetry in the limb movements is obvious and the affected limb is often spontaneously placed into a characteristic position. However, assessing the severity of the injury and the likelihood of recovery is more difficult. It is especially important that symptoms indicative of Horner’s syndrome, including drooping eyelids, pupil constriction, sinking of the eyeball and lack of facial sweating, are identified. The presence of this condition indicates a poor prognosis, as it is associated with more severe nerve damage that could actually be life-threatening in some cases. Additionally, associated fractures should be ruled out. If involvement of the phrenic nerve is suspected, examination of the chest by x-ray is necessary.

Prognosis depends on the the size and severity of the tears, the speed of recovery and the initial clinical management of the injury. First-line treatment is conservative, as up to 70-90% of cases resolve spontaneously. In the remainder of patients, medical intervention is often required. To work out whether a child is likely to progress or not, or need intervention, often imaging and other investigations are not as helpful as regular, direct clinical examination. Developments in microsurgery of the brachial plexus in adults, combined with imaging techniques that can provide better preoperative information, and a better understanding of OBPI have contributed to the increased ability to surgically intervene . However, the timing of this surgery, which children are likely to benefit and indeed which surgery is best is open to debate.

Even with surgical treatment, it has been estimated that 20–30% of cases are left with a residual deficit in limb function. In a further 10–20% of cases, the functional restriction is considerable. As OBPI often leads to imbalance between the agonist and antagonist muscles, retraction and stiffness of the joints, particularly in the shoulder, commonly occurs and can lead to osteoarticular deformities. Altered growth in the glenohumeral joint, resulting from stiffness in internal rotation of the shoulder, can give rise to further deformities and eventual posterior dislocation of the humeral head. These changes are apparent as early as 5 months of age. However, incomplete recovery may not become fully apparent until the child is much older, when the complexity of movements required of the upper limb has increased. Therefore, early screening and rapid treatment are vital so that functionality can be improved or completely restored as quickly as possible.

A condition that is commonly mistaken for BPI is injury to the growth plate of the humerus, particularly in the form of a fracture. Such injuries can produce painful unilateral pseudoparalysis that mimics the restricted movement seen in BPI. The damage is often not visible on x-rays because that part of the humerus has not yet ossified, but the diagnosis can usually be confirmed through the use of ultrasound scanning. X-rays taken 10-15 days after the initial injury will also show the formation of a bone callus. Other pathologies which may be mistaken for OBPI include congenital radial nerve injuries (which almost invariably improve) and cerebral palsy (which tends to get worse with time, unlike OBPI).

Although rare, OBPI has the potential to severely impact a child’s life. Any functional deficits could restrict participation in numerous daily activities, particularly as the child gets older. Early assessment and care, ideally as part of a multidisciplinary team that includes a surgeon experienced in nerve reconstruction and a therapist, gives the best chance of a good recovery and reduces the risk of postural and developmental disorders, and the psychological impact that may arise from these, occurring later in life.

Mr Pundrique Sharma is a Consultant Plastic Surgeon at the Alder Hey Children’s Hospital. He accepts instructions as an expert witness in adult and paediatric cases involving general plastic surgery, reconstruction and burns surgery. Mr Sharma has a special interest in limb reconstruction and nerve injuries, including obstetrical brachial plexus injury. He has also set up a hand fracture clinic, particularly dealing with finger and thumb fractures, as well as metacarpals.

Mr Sharma can also act as an expert in cases involving cosmetic surgery across a variety of surgical aesthetic procedures, including breast surgery, abdominoplasty and liposuction. 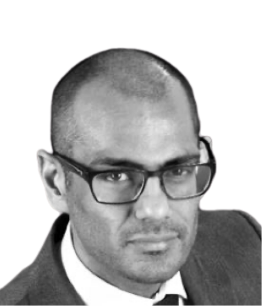 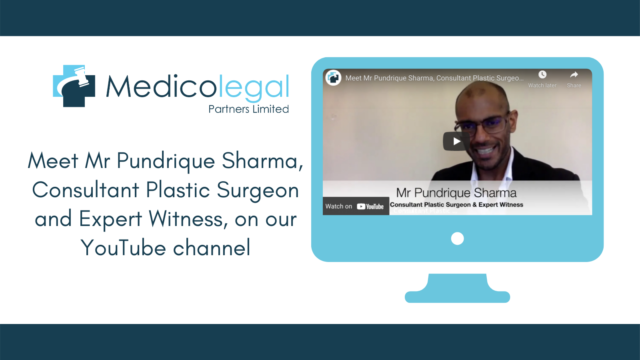 Mr Pundrique Sharma, Consultant Plastic Surgeon, is new to the Medicolegal Partners' expert witness team. Find out more about him in his own words in...
READ MORE 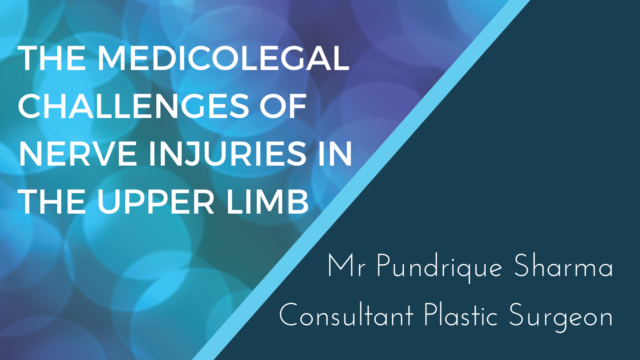 The Medicolegal Challenges of Nerve Injuries in the Upper Limb

The nervous system comprises a network of nerves and nerve cells that carry messages between the brain and spinal cord and other parts of the...
READ MORE 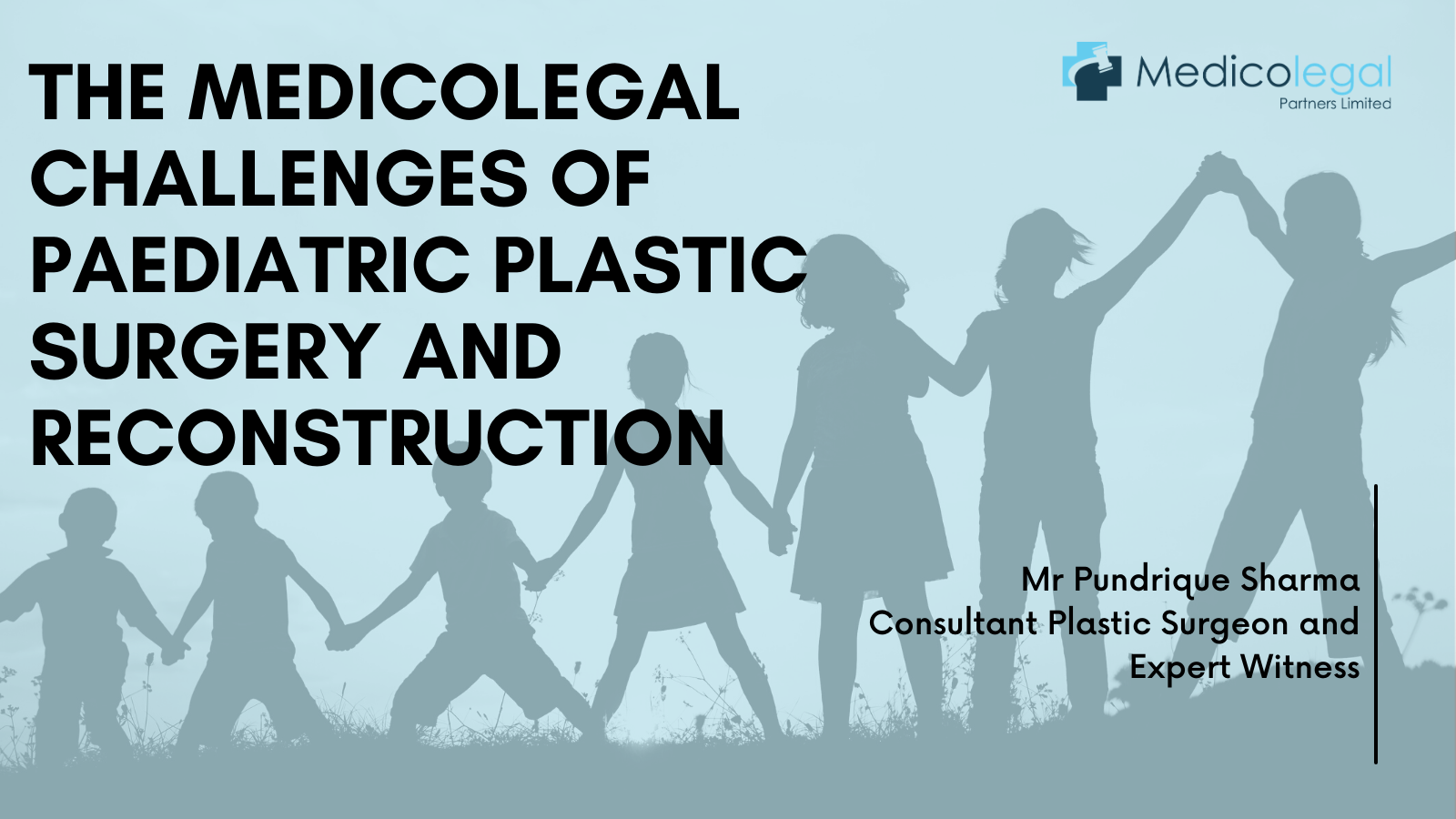 The Medicolegal Challenges of Paediatric Plastic Surgery and Reconstruction

In the paediatric population, plastic surgery is generally used to correct deformities caused by congenital birth defects, tumours or traumatic injuries and to assist in...
READ MORE
© 2023 Medicolegal Partners Limited