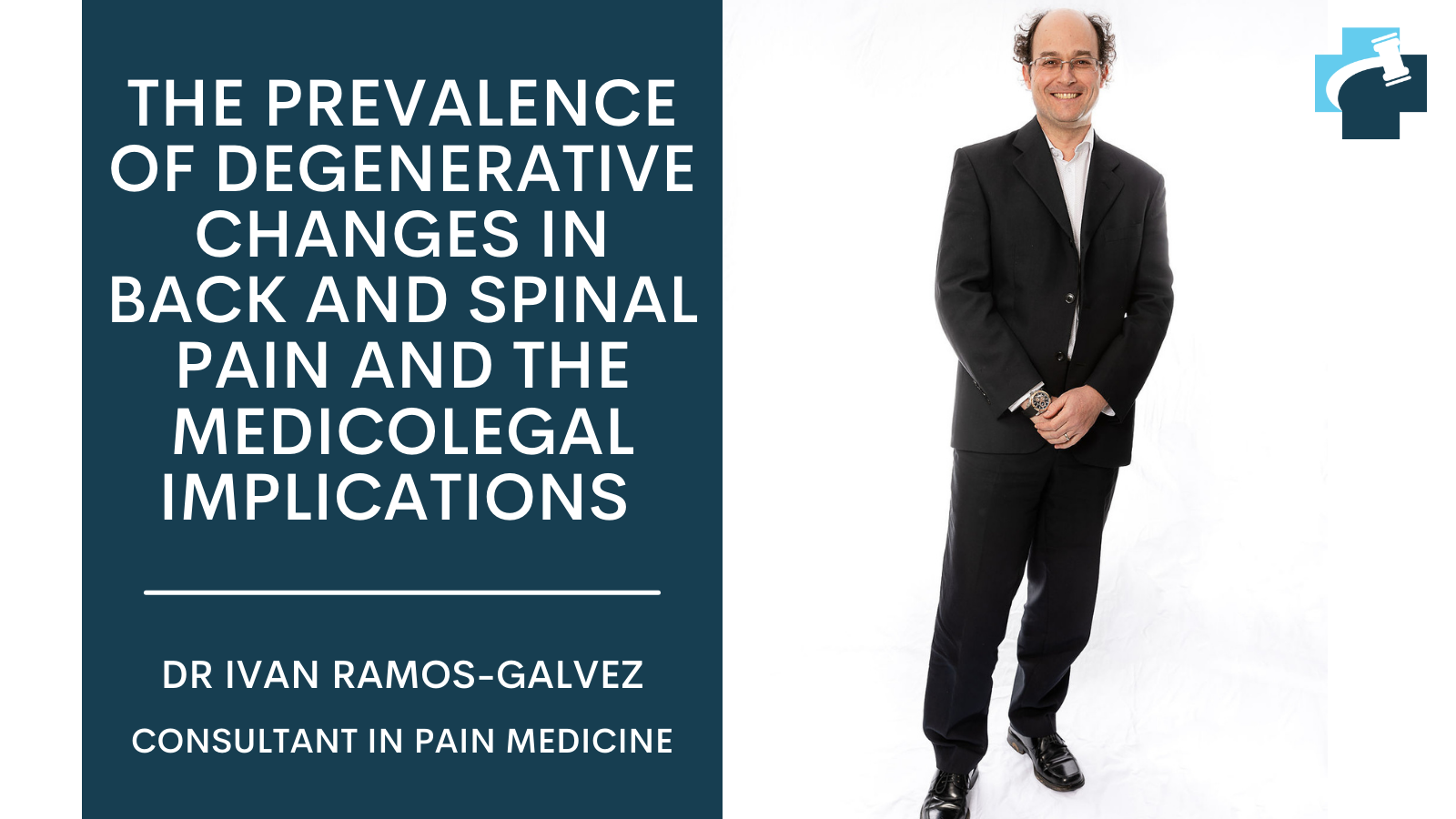 Back pain is the commonest reason patients consult their GP, and it has been estimated that 60–80% of the population will experience the condition at some point during their lifetime. There is a significant socioeconomic impact too, with each UK worker losing an average of 12 days per year. Chronic back pain most commonly originates from the intervertebral discs in the lumbar region, although changes in the apophyseal and sacroiliac joints have also been implicated in many cases. Often, however, the exact cause cannot be found. While the lumbosacral spine is usually able to adapt to the mechanical stresses to which it is subjected, variations in these resulting from posture, daily activities and traumatic events may accelerate the aging process and give rise to degenerative changes.

One of the degenerative changes frequently observed in intervertebral discs is the destruction of the hyaline cartilage which forms the end plate of the disc. This can lead to defects in the end plate, which impacts on the nutrition of the disc. Premature degeneration of the annulus of the disc may manifest as radial tears, most commonly seen in the thinner posterolateral plane. These tears may be associated with an extrusion of the nucleus of the disc. These tears often contain fibrin and vascular ingrowth is also sometimes observed. This suggests that the tears may result from trauma rather than from a purely degenerative processes. As the discs degenerate, they decrease in height, although degeneration is usually fairly advanced before it can be visualised radiographically, as a narrowing of the intervertebral space. This narrowing leads to alterations in the distribution of stresses during movement which could result in secondary degeneration of the surrounding facet joints.

Degenerative changes in the discs have long been thought to have a strong association with low back pain, but more recently this view has become more controversial. Imaging studies demonstrate that while many patients show degenerative changes in the discs of the spine, these often occur in individuals who are asymptomatic in terms of low back pain. However, one difficulty in interpreting the results of such studies is the lack of precise definitions. In particular, the term ‘disc degeneration’ is fairly arbitrary: features that would be considered normal in a patient aged 60 years may be classified as ‘degenerative’ in a younger patient. Therefore, an important research goal is to differentiate between pathological degeneration and normal age-related changes in the spine.

Imaging studies of asymptomatic individuals indicate that degenerative changes in the spine are both extremely common and strongly related to age. The prevalence of disc degeneration increases from 37% in subjects aged 20 years to over 95% in subjects aged 80 years. Disc bulge prevalence shows a similar trend, increasing from 30% in the youngest individuals to 84% in the oldest age group. Disc protrusion and annular fissures are much less prevalent but are also more commonly found in elderly individuals. The fact that so many asymptomatic individuals show degenerative changes indicates that such changes may be incidental and not causally related to presenting symptoms. However, it is also possible that the changes seen in asymptomatic individuals are less severe than in those who are actually experiencing back pain. Additionally, the visibility of some pathology is influenced by whether the patient is standing or lying down when imaging takes place.

Some individuals appear to be more prone to degenerative changes in the spine, and this is probably due to genetic differences. Studies in twins indicate that the heritability of lumbar disc degeneration is between 34% and 74%. Genes associated with disc degeneration have now been identified, although all exert only a small influence on the degenerative process. It is likely that many genes are involved and an interaction with environmental factors seems probable, given the complex nature of degenerative changes in the spine.

The frequent occurrence of degenerative changes in the spine, even in asymptomatic individuals, means that it is difficult to determine the exact cause of any reported symptoms. While there is a wealth of evidence demonstrating a link between physical work, including movements such as frequent bending and twisting, and back pain, there is no clear link with back pathology. As degeneration is an ongoing process, it is difficult to prove that any particular activity is causal. However, it is possible that a specific work-related activity may trigger an already damaged disc to prolapse, and it has been demonstrated that discs showing degenerative changes are more likely to fail under stress than healthy ones.

Degenerative changes in the spine are a common occurrence and are strongly linked to age. However, there is no clear relationship between degenerative changes and reported symptoms: many individuals who show changes on imaging remain asymptomatic. The overlap between changes that are part of the normal aging process and those due to pathological changes makes it extremely difficult to determine the exact cause of reported back pain. Therefore, further diagnostic criteria are required to distinguish age-related degenerative changes from those arising for other reasons.

Dr Ivan Ramos-Galvez, Consultant in Pain Medicine, works at the Royal Berkshire Hospital, with a private practice at Spire Dunedin and Circle Hospitals in Reading. 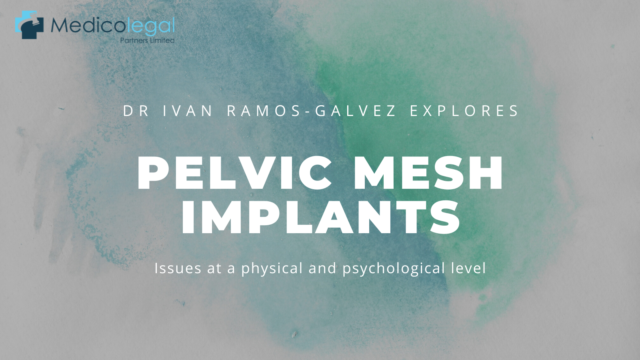 Pelvic Mesh Implants: Issues at a Physical and Psychological Level 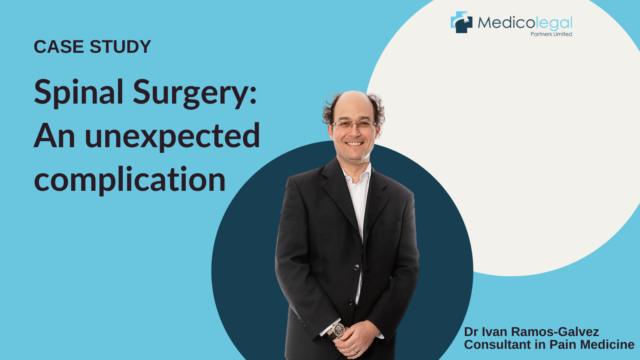 In the second in a series of three case reviews, Dr Ivan Ramos-Galvez LMS, FRCA, FFPMRCA, Expert Witness and Consultant in Pain Medicine with a sub-specialty in...
READ MORE 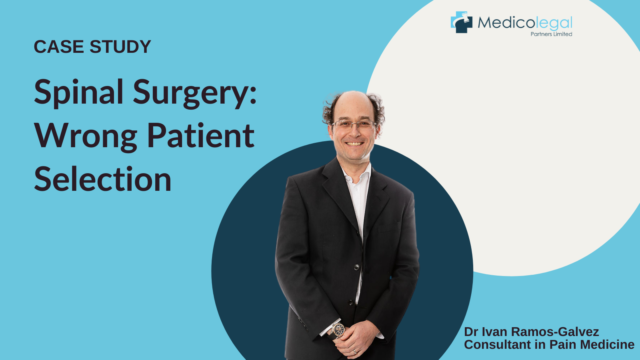